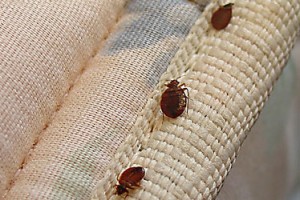 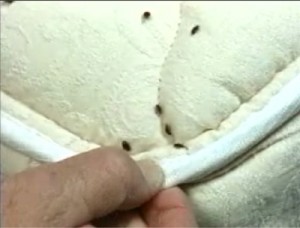 Bed bugs were common in the U.S. before World War II and became rare after widespread use of the pesticide DDT began in the 1940s and 1950s. They remained prevalent in other areas of the world and, in recent years, have been increasingly observed again in the U.S. Increases in immigration and travel from the developing world as well as restrictions on the use of stronger pesticides may be factors that have led to the relatively recent increase in bed bug infestations. While bed bugs are often reported to be found when sanitation conditions are poor or when birds or mammals (particularly bats) are nesting on or near a home, bed bugs can also live and thrive in clean environments. Crowded living quarters also facilitate the spread of bed bugs.
Bed bugs can live in any area of the home and can reside in tiny cracks in furniture as well as on textiles and upholstered furniture. They tend to be most common in areas where people sleep and generally concentrate in beds, including mattresses, box springs, and bed frames. Other sites where bed bugs often reside include curtains, the corners inside dressers and other furniture, cracks in wallpaper (particularly near the bed), and inside the spaces of wicker furniture. Since bed bugs can live for months without feeding, they can also be found in vacant homes.